From dusk till midnight daily

For three days in November, the night sky above our coastal region will be transformed by Global Rainbow, a monumental outdoor laser installation by American artist Yvette Mattern. Seven rays of laser light representing the colour spectrum of a natural rainbow will illuminate the night sky.

Beaming direct from Lighthouse with its origin on our roof, the lasers will be visible across the BCP area as it heads out toward Hengistbury Head and beyond. The lasers will extend over 35 miles and you can take in the best view of the Rainbow by standing directly underneath and letting the beams soar overhead. You will also be able to find viewing points along the Rainbow’s trajectory. There will be an opportunity to stand under the source of the Rainbow at Lighthouse’s outdoor amphitheatre, too.

Global Rainbow has been presented around the World from Toronto to Tokyo and now it’s Poole’s turn to be cemented on the map as a centre for cultural excellence. Global Rainbow signals our resilience and re-emergence from the dark days of 2020, bringing our BCP community together and giving us all hope for the future in a truly spectacular fashion.

Thanks to funding from BCP Council,  Poole BID, HSBC UK and the Garfield Weston Foundation this incredible artwork will illuminate the community and signal not only the restart of a major arts organisation, but also become a visual beacon of hope across Poole, Bournemouth and Christchurch.

We'd love to know where you can see Global Rainbow.  Here are a few places to get you started.

Lighthouse Poole
View the laser illumination from the Amphitheatre, which will be where the direct source of light it is.

Poole Park
Only a stone’s throw away from the original source, Poole Park is a great place to admire the lights as they reflects across the water

Bournemouth Beach
Get those cameras at the ready, and head down to Bournemouth Beach, as these sandy shores are the ideal spot to sit back and watch the lasers in all their glory.

Bournemouth Pier
Position yourself on Bournemouth Pier to get excellent views that nobody else can benefit from, with being stood at a distance from the beams. Open from 9am- 11pm daily, subject to change with weather permitting.

Southbourne Beach
Have the tranquil sound of waves in the background, whilst appreciating the colour spectrum, a perfect location to view the illuminations overhead.

Boscombe Beach
Similar to Southbourne Beach, Boscombe Beach would be ideal If you wanted to have a relaxed approach to watch the illuminations.

So, whether you visit one location, or wish to see the illuminations from different perspectives, make sure to tag any pictures or videos using #globalrainbow or #poolerainbow on socials.

We know that, while you are considering booking tickets for this great show, you will be thinking about what we at Lighthouse are doing to keep you as safe as we can from COVID-19. You can find out all about our COVID-secure measures HERE. We can’t wait to see you soon. 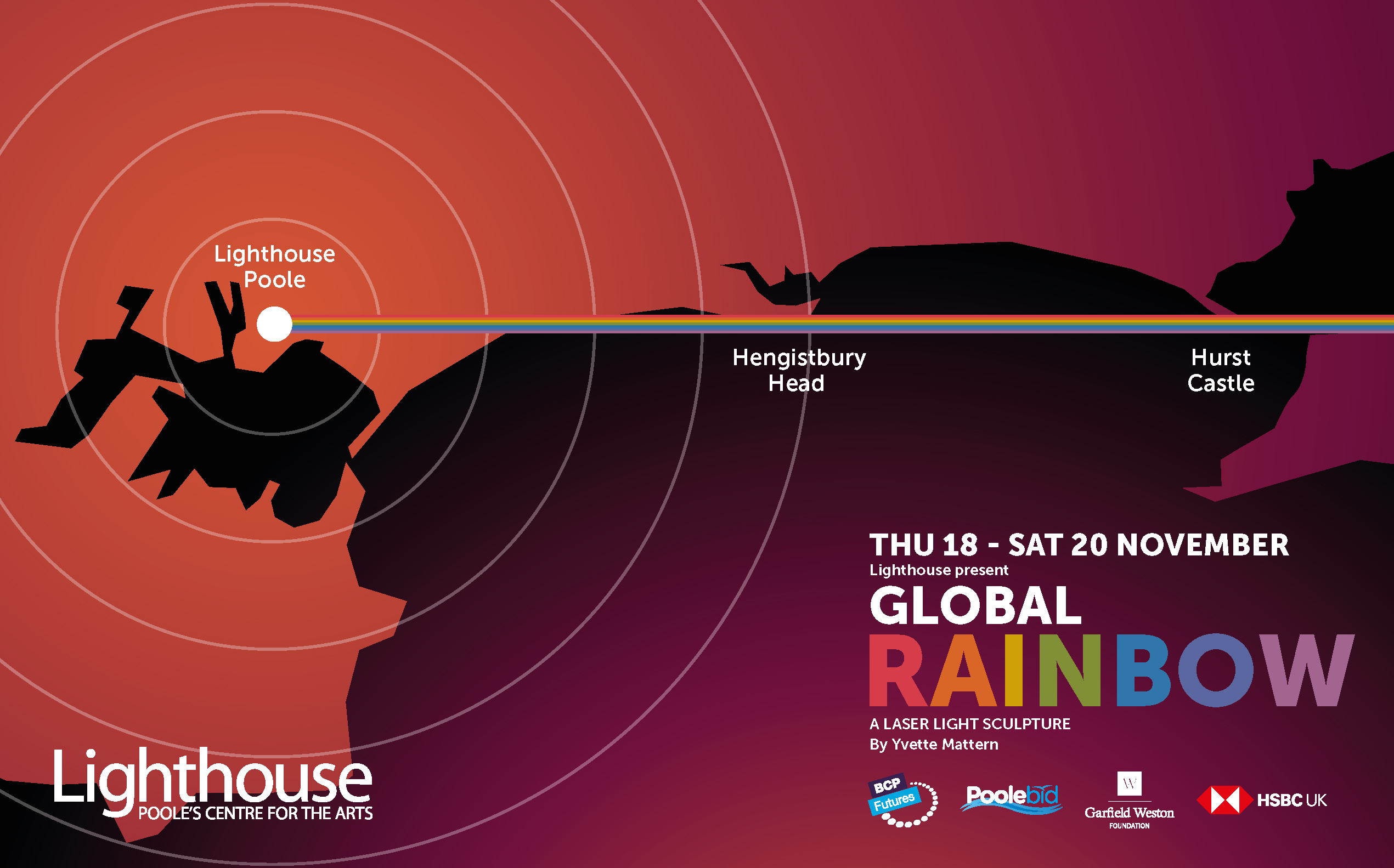 Take a look at some of these amazing images taken by Richard Budd from our test run of Global Rainbow on Wednesday 17th!

Visual artist Yvette Mattern frequently intersects performance, public art and sculpture with her work. Her on-going monumental laser light installation Global Rainbow has been projected in different locations around the world since 2009 and Lighthouse is delighted the BCP region is now joining the likes of the London 2012 Cultural Olympiad, Transmediale 2010 in Berlin, Nuit Blanche in Toronto in 2014 and New York City with Art Protection Fund.

Here, she took time to field a few of our questions…

What is Global Rainbow and what should people expect to see?

Global Rainbow is a monumental light installation created with custom high specification lasers. The lasers do not move, they are static. Depending on atmospheric conditions the artwork can be seen for 60km. Spectators can view the Global Rainbow from multiple perspectives and it appears different depending on their position, like a natural rainbow. If one is able to stand directly underneath the beams and is able to view the starting and vanishing point, then a ‘bow’ is visible.

Why a Rainbow; where did the inspiration for Global Rainbow come from?

In 2005 I created a large-scale performance and light installation during my residency at the Baltic in Gateshead. My background is in feature film and video for theatre and I was exploring how this translated into visual arts. After the Baltic, light became the medium of extreme interest and during this exploration I witnessed an epic and striking natural rainbow over Walden Pond in Massachusetts. I became obsessed with how to create a visual artwork that had the same impact and scale of a natural rainbow and eventually discovered laser technology and the Global Rainbow was born.

Global Rainbow has been with us for a while, but it seems more relevant than ever, what was your intention for Global Rainbow; and has that evolved over time?

Global Rainbow is 13 years old now and it became my single focus as an artist. I manage every aspect from initial contact to presentation. The resonance of the artwork and its focus on embracing diversity and connecting all demographics as a symbol of hope has become even more pertinent during the challenging global pandemic and shifting political and environmental landscapes. My interest has always been one of togetherness, inclusion, beauty and hope.

What would you like people to take from Global Rainbow?

You’ve worked all over the world, how does working on public art in Britain and Europe compare with, say, the US or South America?

Britain has always held a special place in my heart. My experience at the Baltic and during the 2012 London Cultural Olympiad was highly enriching with overwhelming support from the media, specifically the BBC and individual presenters and local audiences. British culture has always captured my interest in music, film and visual art. British artists are always on the cutting edge with intelligence and wit. The US has always struggled to provide an infrastructure to support individual artists and it is always challenging in terms of budgets. South America has struggled economically and politically the last years but my experiences with presenters who have loved the Global Rainbow since its debut in 2009 and have fought to present it despite the challenges has been overwhelmingly positive.

There seems to be a crossover in your work between art and technology and science and maths, you must be an enthusiastic collaborator but how do you hold on to your initial vision?

The biggest challenge for me has been the entertainment laser industry. Art and technology have evolved dramatically over the last 13 years and the emergence of monumental and immersive works utilising technology have become the norm and a very popular medium. Global Rainbow has inspired many artworks but it still remains unique and pure. The laser entertainment industry is focused on corporate and large entertainment budgets. I have struggled to keep the integrity of the artwork and have been challenged to prove the uniqueness of the artwork in relationship to commerce and industry. Technology is the avenue and tool for more innovative creation but without the innovative ideas and creativity of artists the technology remains stale in vision. Because lasers have been historically seen as ‘laser shows’ or pure ‘spectacle entertainment’, the Global Rainbow has straddled and been challenged by both worlds. It is an artwork first and foremost that has been embraced by many all over the world for its impact and vision.

I am currently returning to my roots in feature film and am working on a screenplay based on a true story set in the late seventies in Florida. The story is a tragedy but like the Global Rainbow it focuses on enlightening hope in humanity. I spent the last year collaborating with the artist Vanessa Beecroft in Los Angeles on various projects and editing her upcoming book. I am also quite active with my husband, Georg Polke in supporting him on activities surrounding his father, Sigmar Polke and the estate. I will of course continue developing visual artworks but my project of interest the last years is extremely technically challenging and therefore takes time and patience to actualise.

The presentation is poetic, magical and powerful. It encompasses the skyline and its viewing perspective is as ephemeral as viewing a natural rainbow. Theoretically and symbolically its presentation encompasses geographical and social diversity in its reach throughout distinct points across the globe